Case Study: Does the Photo Fit the News? The Ethics of Powerful Images in the Immigration Debate 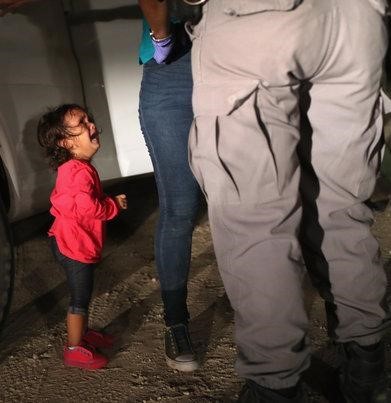 In June 2018, discourse around immigration to the United States came to a peak when award-winning Getty Images photographer John Moore captured an image of a distraught, crying, two-year-old Honduran child beside her mother and a U.S. border agent. The image of the toddler, with her shoelaces removed and mouth agape in a wail, came to represent Trump’s “zero tolerance” policy toward undocumented immigrants; thousands of children, parents, and family members were separated at the U.S. border as a form of punishment for attempting to cross illegally.

The photo galvanized the public to contact both Republican and Democratic representatives with their objections, and also inspired people to donate to legal defense services for refugees. The emotional photograph had such a significant public impact that shortly after its publication, Trump issued an unusual retreat and ended the hardline policy of separating families.

Just over a week after the photo was taken, and subsequent to its viral spread, Time magazine’s cover of June 21, 2018 featured a photo illustration of the child, without her mother or the border agent, opposite an image of a menacing Trump staring down at her. The caption read, “Welcome to America.”

When Moore took the photo, it was unknown whether the mother, Sandra Sanchez, and her daughter, Yanela, would be separated during the

Time Cover immigration process. Subsequent to the publication of the original photo, it was discovered that the child and her mother were detained without being separated. Carlos Ruiz, the border patrol agent whose legs are in the original photo, told CBS news that upon Sanchez’s illegal crossing, he detained her and her daughter for a formal search, which took “less than two minutes.” Ruiz reported that as soon as the brief search was completed, Sanchez picked up her daughter, who immediately stopped crying.

The Trump administration harshly criticized Time, accusing it of running “fake news” given that the child in the photo illustration and her mother were not separated at the time that the photograph was taken, nor were they separated afterward. Former Speaker of the House Newt Gingrich called for Time to apologize to Trump, and Press Secretary Sarah Sanders tweeted that Democrats and the media were guilty of exploiting the little girl to “push their agenda” to revise Trump’s hardline approach to immigration. Trump also weighed in, tweeting that the Democrats have no intentions of resolving this “decades old problem,” and that “we can pass great legislation [on immigration] after the Red Wave,” referring to the then upcoming elections in November 2018. Other news media outlets argued that printing the photo was a blunder on the part of Time, and that the intended effect of the image “oversold” the problem of families detained and separated at the border.

Time issued a correction which made clear that the child was not taken away from her mother by border agents. However, Time defended its decision to run the cover’s photo illustration, indicating that the image of the distraught child is representative of the thousands of immigrant children separated from their parents and of whom there are not any photographs. Time’s editor-in-chief, Edward Felsenthal, issued a statement arguing that the photo captured the terror of what was indeed happening at the border and in detainee centers:

The June 12 photograph of the 2-year-old Honduran girl became the most visible symbol of the ongoing immigration debate in America for a reason: Under the policy enforced by the administration, prior to its reversal this week, those who crossed the border illegally were criminally prosecuted, which in turn resulted in the separation of children and parents. Our cover and our reporting capture the stakes of this moment.

Felsenthal and those supporting publication of the cover argue that the image of the toddler on its cover was representative of immigration-related political discourse, and that the photo illustration conveyed contemporary treatment of undocumented immigrants. Alongside government-issued photographs of children in cage-like pens in detainee centers, the photo on the cover of Time served as a poignant representation of the difficulties experienced by undocumented immigrants.

Moore is an experienced photojournalist and had covered immigration issues previously. He expressed that he captured a raw and honest image that did much to publicize the terror experienced by many undocumented immigrants. He said he believes that his job as a photojournalist is to inform and report what is happening, and that when he took the photo, he feared that the child and her mother would be separated in the detainment process. Moore also argues that in his work, “it is important to humanize an issue that is often reported in statistics.” He issued no objections to the use of his photograph as it appeared on the Time cover.

Schmidt, S. & Phillips, K. (2018, June 22). “The crying Honduran girl on the cover of Time was not separated from her mother.” The Washington Post. Retrieved from https://www.washingtonpost.com/news/morning-mix/wp/2018/06/22/the-crying-honduran-girl-on-the-cover-of-time-was-not-separated-from-her-mother-father-says/