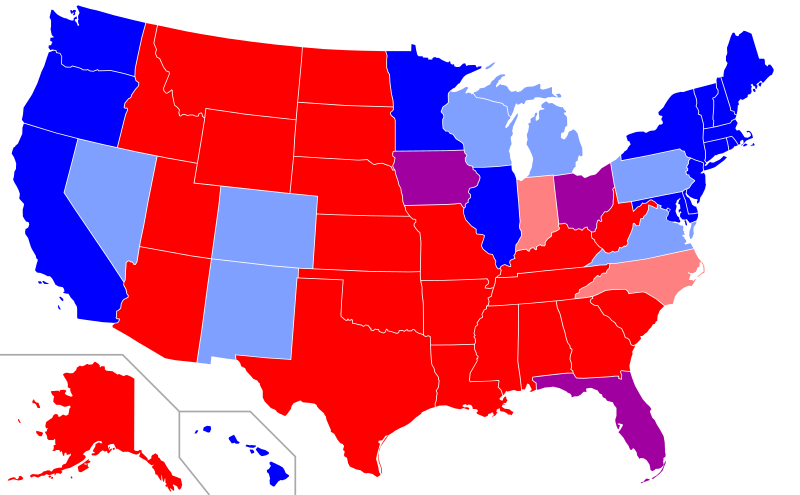 Wikimedia Commons CC BY 3.0A statewide poll taken before the 2016 presidential election showed that just 15% of Arkansas residents rated the honesty and ethical standards of journalists as “high” or “very high.” This finding is about 12 percentage points below the all-time low findings of a national Gallup poll. Not surprisingly, Arkansas is a “red state,” part of a southern block that helped elect Donald Trump as the President of the United States.

How do those facts affect the way that I teach journalism ethics at the School of Journalism and Strategic Media at the University of Arkansas? Certainly the topics are nearly identical to the ones I covered while teaching journalism ethics as a graduate assistant at the Philip Merrill College of Journalism at the University of Maryland, located in a state that is noticeably blue and was carried by Hillary Clinton in the last presidential election. The main difference is that for past three semesters at Arkansas, beginning with the 2016 presidential election, my students have engaged in research studies that have allowed them to make their own judgments about the ethics of journalists as well as the politicians they cover.

During the 2016 presidential general-election campaign, the students assessed the tone of both newspaper and TV news coverage as well as all of the campaign ads and tweets by both Clinton and Trump. The majority of 56 ads that ran nationally were deemed to be negative by the students, who rated the ads together as a class or in small groups. Overall, Clinton ran 34 ads nationally —about 50% more than Trump. Clinton produced almost as twice as many positive ads as Trump, but nearly a third more negative ones, too. Despite media attention on Trump’s reliance on Twitter, Clinton tweeted more than twice as much as Trump, with 1890 tweets compared to 865. The Democratic presidential candidate also had posted more than twice as many positive tweets as Trump, but double the number of negative ones, too.

Both the candidates and the journalists were judged by the students as having challenged ethical boundaries. At times, the newspapers showed bias against both candidates, the students said, but the coverage of the campaign was largely balanced. On the hand, by broadcasting such a preponderance of negative segments about Trump, they said, the two TV network news programs showed a bias in favor of Clinton. The students reported criticism of the candidates as well, saying that their ads included made-up so-called facts and used other information “out of context.” The negative tweets were particularly disturbing to them: “Donald Trump did not fact check and made outlandish statements. Hillary Clinton was not transparent through her sickness and other personal issues. Both candidates posted negative tweets about each other and maximized harm.”

During the Spring 2017 semester, journalism ethics students focused their study on coverage of Trump's First 100 Days in office, and the president's use of Twitter during that time period. This time, the analysis of news coverage consisted of looking at front-page articles directly pertaining to Trump in the New York Times and USA Today. While Trump received more coverage from The New York Times, the majority of the articles the two national newspapers published about Trump were similar in that they were mostly rated very negative, negative, or neutral by the students. Of the 207 total newspaper front-page articles reviewed, about 10% were very negative, about 52% were negative, about 28% were neutral, about 9% were positive, and about 1% were very positive.

The analysis of TV coverage consisted of assessing 64 evening news segments: 30 from the CBS Evening News and 34 from the NBC Nightly News. The students found roughly six out of ten TV news segments about Trump to be either negative or very negative. About 11% of the evening news segments featuring Trump were very negative, about 52% were negative, about 34% were neutral, about 3% were positive, and not one was very positive. The students also analyzed 452 tweets from Trump’s personal Twitter account during his First 100 Days. More of his tweets were in the positive range. Of the 452 analyzed tweets, about 16% were very positive, about 26% were positive, about 26% were neutral, about 20% were negative, about 12% were very negative. Yet, one group of students wrote: “Trump’s tweets had a few ethical concerns. Although he seems very transparent, he wasn’t always accountable. His negative tweets deflected the blame off of himself and onto the media, Hillary Clinton, or other people.”

Indeed, the students struggled to determine if the spate of controversies involving Trump –everything from the disagreement about the size of the inauguration crowd to the investigation into possible collusion between Russia and the new administration –justified the negative coverage by the media. One group of students wrote: “CBS and NBC provided objective information to the community with news about Donald Trump. Despite the fact that the coverage was negative, they did not act unethically. For example, CBS reported on the deceptive aspects of Trump’s ‘Hire American, Buy American’ but were not biased in their reporting. They simply reported on a topic with a negative undertone.”

Students in my Fall 2017 journalism ethics class studied that negativity in depth. Some aspects of the study were similar to two that went before. The students focused on the tone of both newspaper coverage and Trump’s tweets over a two-month period. But this time, with the help of students in a graduate section of journalism ethics, they attempted to map out a correlation between the tone of the tweets and the news coverage that they drew.

Once again, the majority of the front-page stories in the two newspapers studied—the Arkansas Democrat-Gazette and the New York Times—were on the negative side. Of the 176 articles analyzed, the students determined about 11% were very negative, about 44% were negative, about 32% were neutral, about 7% were positive, and about 3% were very positive. Despite the negativity, one group wrote: “We all agree coverage was ethical … the coverage is never personal towards Trump.” In analyzing 611 tweets by Trump, about 14% of his tweets were very positive, about 38% were positive, about 21% were neutral, about 19% were negative, and about 9% were very negative. One group of students wrote: “A common misconception is that Trump’s tweets are mostly negative, but in reality he’s pretty fair in terms of positive, negative & neutral tweets.”

But Trump’s negative tweets appeared to carry more weight in the eyes of some of these students. “The tweets we reviewed generally lacked ethical considerations. For every occurrence-based tweet, ‘I did this,’ ‘We’re working on this,’ there were just as many tweets where the president abused the clout of his office to insult people, undermine the press, or promote things which he had no business commenting on. His flashy fashion does a lot to gain himself attention only at the expense of the people/organizations he targets.”

The students found a different breakdown when looking at the tone of the Trump tweets that generated stories in the two newspapers. Of those 70 stories, 3% were very positive, 10% were positive, 13% were neutral, 46% were negative, and 23% were very negative. Overall, roughly seven out of 10 stories about Trump's tweets were either very negative or negative. Negative tweets led to negative stories. Addressing the negative coverage, one group of students wrote: “We think this could be because critical stories sell better.” And yet, ultimately, these students learning journalism ethics in a red state seemed to have a greater clarity when it came to understanding why negative tweets—and negative media coverage—might not necessarily be a bad thing for Trump. “Some tweets were positive but rubbed us the wrong way,” one group of students wrote. “But if someone was in line with [Trump’s] beliefs, they might think differently.”