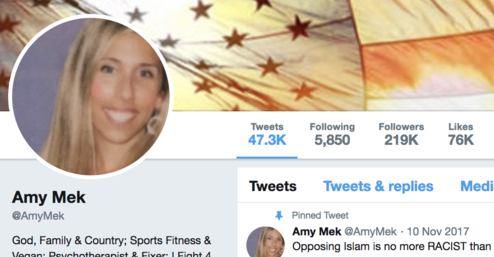 Twitter[PDF Version] On May 31, 2018, HuffPost reporter Luke O’Brien published a story revealing the identity of the person behind an infamous Twitter account with over 200,000 followers as 45-year-old Amy Mekelburg. The in-depth profile was part of HuffPost’s ongoing investigation into the most influential anonymous Twitter and Facebook users that, in the words of HuffPost reporter Nick Baumann, “spread hate.” The account, which O’Brien correctly linked to Mekelburg, is a powerful proponent of far-right political ideologies and was active in spreading what many deem as Islamophobic propaganda and factually untrue claims. Averaging around 25 tweets a day, the account quickly gained popularity on social media, it was endorsed by President Donald Trump and members of his administration, making it well-known in conservative circles. O’Brien’s story quickly became controversial due to its use of “doxing” (or “doxxing”), the tactic of revealing the identity and personal details of the person behind an anonymous online account or website. By connecting and publicizing the online actions and words associated with a specific named individual, online activists can coordinate with others and use doxing in a campaign to embarrass individuals, ruin reputations, harm political ambitions, or to get an individual’s employment terminated. The practice is increasingly used by members across the political spectrum, from the far left to the far right, and has become an everyday weapon in the battle of political ideologies. Some think of it as a tactic that leverages the critical power of free speech, whereas others see it as a vigilante approach to online justice given that its practitioners are often anonymous, or at least unaccountable for the harms of doxing individuals. The doxing of Mekelburg is important as it merges tactics of investigative journalism and online activism, and raises many ethical concerns.

The crowdsourced nature of social media has made it possible for everyday individuals to gain celebrity status or to become known as public figures through their online personas. The malleable nature of online identity means that individuals are able to remain anonymous or control which parts of their identity are viewable to others, often making it easier to share controversial opinions or ideas. As such individuals gain more social and political influence, some argue that the public has a right to know who they are. This is why HuffPost started investigations into influential anonymous social media accounts, such as that of Mekelburg, that were spreading what many judge as false information and hate speech. HuffPost reporter Nick Baumann explains that while the First Amendment gives individuals the right to spread hate speech and discredited ideas anonymously, “the identities of influential anonymous people are inherently newsworthy” and should be made know to those who wish to know them. Baumann and O’Brien even argued that the story was not a case of doxing at all, since it presented newsworthy information to the public and answered concerns about the possibilities of Mekelburg’s account being an artificial bot or Russian troll. In this manner, they maintain that the story followed journalistic codes of ethics, including reaching out to Mekelburg’s family and her husband’s employer, World Wrestling Entertainment, who terminated his employment after news of the story broke.

The journalists maintained that this was not the coordinated harassment of many doxing campaigns, but was instead the common journalistic practice of seeking comments and reactions from those affected by the story before its publication. O’Brien argued that giving sources and affected parties “a chance to respond to information” is “exactly how ethical journalism works” and defended the information included in his report as necessary to the story. Emma Grey Ellis points out that while doxing campaigns tend to be undertaken by anonymous individuals that cannot be criticized in return, cases such as this involve named reporters who “have bylines, and can therefore be held accountable” for the stories they write and the information they include. Because of this, she argued that reporters like O’Brien “include only personal information that is relevant to a story--facts the public has a compelling interest in knowing.” Many believe that the information in the story was necessary to create a profile of Amy Mekelburg and provided context for her often-bigoted posts.

Others consider the story to be a case of justified doxing and as serving the public good. Many, like Marla Wilson, believe that doxing is “an effective way to make people think twice about being so bold with their racism” and that releasing the names of those behind racist online accounts creates a sense of accountability and encourages reflexivity by those who feel inclined to create them. Some argue that doxing forces those uttering unpopular opinions and beliefs to face the public and defend their ideologies rather than just placing them online.

Others believe O’Brien went too far in his story on Mekelburg and included information that was not necessary. In fact, some argue that the story was not necessary at all, and that by pursuing the identities of those behind social media accounts that spread beliefs considered reprehensible by some, it hurts rather than helps political and social discourse. Conservative reporter Kevin Boyd points out that by including background information about Mekelburg that revealed the identities of her family members and their businesses, the story gave “the impression that they either knew about or [agreed] with her tweets” and indicted them as supporters of her account and her beliefs. Because of such implications, many consider the story to be nothing more than an attempt to shame Mekelburg for her views and hurt her family’s businesses, ones that Mekelburg “has never been linked to or involved with” according to her sister-in-law Alicia Guevara. Damon McCoy points out that one of the main reasons doxing is used is to “expose those with whom [people] disagree with,” a position held by those who suggest that the report done by O’Brien and HuffPost was motivated by bringing shame to those with divergent political viewpoints. Some may argue that the revealing the identities of those behind reprehensible or unpopular speech is actually counterproductive to serving the public interest Tony McAleer, a former white supremacist who now runs a rehabilitation program for neo-Nazis, argues that doxing is not effective in ending hate speech and changing peoples’ viewpoints. “If isolation and shame is the driver for people joining [hate] groups, doxxing certainly isn’t the answer” argues McAleer. It actually “slows things down” in his efforts to rehabilitate those who subscribe to hateful ideologies given its employment of isolation and shame.

The ethics of doxing must be discussed more as its practice grows to include journalists and targets on all sides of the partisan spectrum. Emma Gray Ellis worries that “once you strip away the intentions… both sides are sharing the same swampy low ground” when doxing is used as an attempt to punish individuals for their political or personal beliefs. What are we to think about the uses of intentional or unintentional doxing by journalists working on contentious but important stories that might shed light on the political and social controversies of the day?

1. Was the HuffPost story on Mekelburg a case of doxing? Why or why not?

2. Was the story written and researched in the right way, regardless of whether we label it as a case of doxing?

3. Can journalists “dox” individuals behind online accounts? When and why can they participate in this practice? What limits should constrain their revelation of online identities?

4. How does the practice of doxing differ in the context of online journalism from that of activists seeking social justice? Does the role of journalist make any difference to the ethical limits of the act of doxing? How does investigative journalism differ from doxing, either by journalists or members of the public?

Boyd, K. (2018, June 04). “The HuffPost Ruined An Entire Family For One Person's Tweets.” The Federalist. Available at: https://thefederalist.com/2018/06/04/huffpost-ruined-entire-family-one-persons-tweets/

Ellis, E. G. (2017, August 18). Doxing Is a Perilous Form of Justice-Even When It's Outing Nazis. Wired. Available at: https://www.wired.com/story/doxing-charlottesville/

McCoy, D. (2018, May 01). When Studying Doxing Gets You Doxed.” HuffPost . Available at: https://www.huffingtonpost.com/entry/opinion-mccoy-doxing-study_us_5ae75ec7e4b02baed1bd06cc