Cruising Down the River Styx 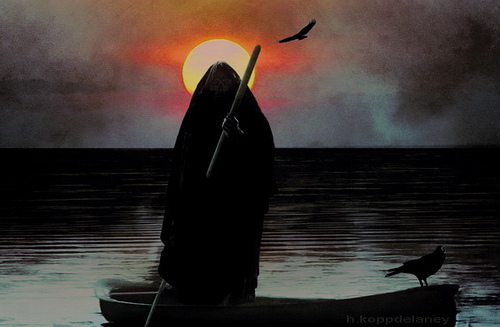 Many years ago I supervised an annual graduate seminar in London devoted to Film in Britain. My partner was Kenneth Adam, past Director of Television for the BBC television service who, in the midst of his distinguished career, came under considerable heat for his decision to ban from Britain’s airwaves a 1965 production that had been financed by the BBC and directed by Peter Watkins. It was called The War Game and it pictured, in vivid detail, the effects of an attack on Great Britain with nuclear weapons.

Kenneth subsequently made the film available for screening in theaters, where an appropriate warning could be given to its audiences. However, it was his decision at BBC that the production was sufficiently horrific that emotionally sensitive viewers might tune in to the program accidentally and be seriously distressed. He said that some viewers, as had been reported following Orson Welles’ 1938 War of the Worlds radio broadcast, might have heart attacks or be driven to suicide. Kenneth’s decision illuminated an issue of ethical significance, for which he paid the price, enduring a great deal of criticism at the time.

Compared with what appears on cable today, the show was mild indeed. Nowadays, on any night of the week, a few hours operation of the remote control produces handsomely designed scenes of mayhem, shooting, stabbing, torture, poisoning, cannibalism, disfigurement, disembowelment, defenestration, rape and incest, all accompanied by dialogue frequently obscene and scatological. The only communication prohibition still enforced legally in this country is that which deals with child pornography, examples of which can, nonetheless, be found on the Internet. Significantly, neither cable nor the Internet are regulated by the FCC under Section 326 of the U.S. Communications Act, which deals with obscenity, indecency and profanity.

Apart from mere violence in current cable programming we are also provided with a cornucopia of doomsday programming. These are devoted to “ends of days” prognostications, enhanced with vividly crafted, award-winning imagery of how the earth will soon be destroyed by volcanoes, meteors or comets, tsunamis, earthquakes, epidemics, gamma rays, sun storms, a diminishing atmosphere, a diminishing magnetic shield, global warming, global freezing and an expanding, dying sun. Sometimes imagination fails, and these programs posit the existence of aliens and zombies hell-bent on destroying humanity. But the effect is similar.

The affect of such programming upon audiences, both individual and collective, has been of concern to sociologists and psychologists for many years. It is reported that the first M.A. thesis and the first Ph.D. dissertation that dealt with the motion picture (1916 & 1920) were sociological studies of the effects of that medium.

In the late 1940s, sociologists Paul Lazarsfeld and Robert Merton coined the term “narcotizing dysfunction” to describe the reaction of individuals to an excess of mass media stimuli. In the 1950s, psychologist Frederick Wertham attracted attention with allegations about long-term deleterious effects on children from violent stories and images in comic books. One of these publications, Tales from the Crypt, was savaged at a Congressional investigation headed by Congressman Estes Kefauver.

In the years that followed, other researchers in the social sciences have struck similar alarum bells. One frequently cited effect of violent content such as the alleged brutalization of human behavior, allegedly leads to an increase in the national crime rate.

To our surprise, however, we discover that the latter has not happened in this country. FBI statistics suggest a decline in national crime during the last several years, down so much that a recent issue of Time magazine devoted a feature article to this phenomenon.

Entertainment industry figures reveal that both feature films and television/cable programming that feature violence and end-of-days content are among the most popular and financially profitable kinds of content.

In a related business, at the auctions of motion picture posters at Heritage Company in Dallas, Texas, those items that feature horror and doomsday science fiction lead all others in sales. Several of these individual posters have recently sold for well more than $100,000 each.

In the art world, one of Francis Bacon’s grotesque paintings recently sold at auction for $140 million. By contrast, a painting by Norman Rockwell went for $15 million, which just shows that in the marketplace hideous will beat wholesome any day of the week.

Certainly, this fascination with horror and violence is not new. A recently published book by Judith Flanders, titled The Invention of Murder, deals with the Victorians’ fascination with horrible crimes committed within the dark shadows and deep fog of London streets, and of the newspaper coverage and fictional literature that exploited those horrors.

In France, many mourned the closing of the Grand Guignol Theater in 1962, which featured realistically performed acts of violence, murders, disfigurement and gross mayhem exerted by human beings upon one another.

What does this all mean? Has life grown dull for citizens of modern societies, so much so that we seek titillation with mayhem? Or is life so worrisome that we seek catharsis through counter-phobic exposure to the horrific?

Perhaps exposure to an expanding diet of violent melodrama neutralizes its effect. Some studies report that repeated exposure to violent and grotesque images desensitizes individuals so that the disgust and horror that they experience on a first viewing is no longer felt upon the fourth or fifth repeat.

It can also be argued, as some do, that healthy human beings are fascinated by horror and the grotesque. Scots are said to be dour, while New Englanders, like myself, are said to have a morbid sense of humor. And who among us does not enjoy looking at Charles Adams’ cartoons from the New Yorker?

The psychiatric literature suggests that, for some people at least, pain is easier to bear than joy. If they laugh, it is to keep from crying. As for death itself, the ultimate insult to human consciousness, we all go to great lengths to deny it. As Beverly Hills psychiatrist Martin Grotjan has said, “We look at dead people every day in the newspapers and we say to ourselves, they are dead, but I can go on living for a while longer.” It’s like sitting in front of a warm fire within a well-built house, while a devastating blizzard rages outside. For the moment at least, until the lights go out, we enjoy our protection against the elements.

So. What’s a media researcher to do about all this?

Experience tells us that we will endure, condemn, discuss and conduct numerous studies that produce contradictory conclusions. There will be a great coming and going of learned professionals and exploitive journalists, and many tenure-supporting reports will be published in peer-reviewed journals. There may even be ill-advised laws passed on both federal and state levels. In the end, as with the weather, we will talk a great deal and do nothing.

If we’re lucky, that is. The idea of our government monkeying with either communications or the weather gives us something more to worry about.

In the end, so it seems, a sense of humor, a tolerance for ambiguity and pharmaceutical intervention will get us through the nights. The days will take care of themselves.