“Obooma:” A Case of Getting It Right

According to CBS Evening News Managing Editor and news anchor Scott Pelley, “We’re getting the big stories wrong, over and over again.”1 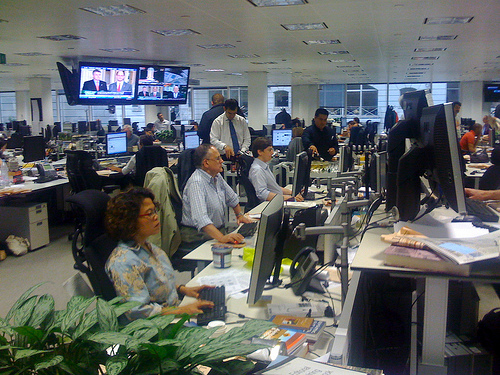 The technological ability to “break news” quickly is perhaps the most powerful aspect of news media today. We learn of events as they transpire, rather than after the fact. However, with that power comes great responsibility and, when used injudiciously, it can devastate.

In the memoir Gabby, Mark Kelly, husband of Rep. Gabrielle Giffords, called it “the most shocking moment of [his] life” when he heard on the news—an incorrect report—that his wife had been killed in the shootings in Tucson in January 2011.2 Sandy Hook Elementary School shooter Adam Lanza was initially misidentified as his brother and his mother was inaccurately cited as a teacher at the Newtown, Connecticut school. The New York Post ran a photo of two men as “people of interest” to police in the Boston Marathon bombings, which was not correct. The Moore, Oklahoma tornado death toll rose and fell as official numbers were released.

But about five months before Giffords was shot, a Tacoma, Washington newsroom set an exemplary model of how to successfully handle breaking news.

On Tuesday, August 17, 2010 at 1:50 p.m. “booms” occurred during which “buildings shook, alarms blared, dust and leaves drifted to the ground and cars vibrated across the South Sound”3 in the Tacoma area.

Karen Peterson, executive editor of The Tacoma News Tribune, sent reporters outside to look around and immediately posted on the newspaper’s Web site something like, “We just heard two really big booms, we’re trying to figure out what they were.” She said, “That’s all we put out… and the scanner was going nuts.”

Fairly quickly, it was determined that the “explosions” were actually sonic booms from two F-15 fighter jets racing from Portland, Oregon to intercept a small plane that had entered restricted airspace designated to protect a visiting President Barack Obama.

Interviews with some of News Tribune’s employees suggest that practices within the newsroom, such as the presence of a continuous news desk (created in 2006) and collaborative effort from all employees who were in the newsroom that day, allowed the News Tribune to follow leads and let readers know what was confirmed and what was not in a running dialogue online.

Peterson compared the “Obooma” (a trending word on Twitter during the event) incident to another from 2006 in which a ship transporting part of the new Tacoma Narrows Bridge scraped the underside of the preexisting bridge. She said,

We didn’t report that online because we didn’t know for sure what had happened and it was probably half an hour later before we could get anyone to confirm that that had happened and that’s when we posted the news. That just shows you the difference in what’s happened in a few years time. We weren’t comfortable with “We just heard two booms” in 2006, but we are now.

This rapid evolution in the treatment of breaking news exemplifies the delicate balance journalists face today in working to be accurate while keeping their readers informed of current events. In the Internet era, Peterson and her fellow News Tribune employees have made a case for sharing exactly what journalists can verify and no more, and releasing news in an incremental fashion that prevents them from making “the big mistake” that will forever color the coverage of other events and their own reputations.

To prevent readers from jumping to conclusions, it’s been suggested that journalists today have an obligation to share what they do not know at the time of publication in a kind of “disclaimer paragraph.”4 This tool could be particularly useful in dealing with breaking news scenarios. Investigative journalist Mary Hargrove said that being transparent with what is unknown “could avert serious misunderstandings.”5

The News Tribune employees who handled the “Obooma” situation echoed this sentiment.

Stacey Mulick was a primary reporter for the News Tribune’s “Obooma story.” She was also staffing the continuous news function for the early shift that day. Mulick said she put up frequent reports of what the booms were not. She said she would post things like, “We heard from Fort Lewis, we know it’s not this… initially we kept saying what it wasn’t.” Another reporter confirmed the sonic booms from the FAA. The Tacoma News Tribune was the first news outlet to report this confirmation.

Reporter Stacia Glenn contributed to the main story on the day of the booms, wrote a follow-up with the pilot who had crossed into Obama’s airspace and gathered reaction from the public. She was getting ready for work when the booms occurred, so she phoned into the newsroom. Practicing “boots on the ground” reporting, Glenn went to the waterfront to see if there were problems there. She texted in information and begin calling in updates, and “it would go on the blog and get posted.”

I think in the old days we certainly would have waited to be sure what the booms were before we told anyone about it… We were so conditioned that you had to have all the answers before you put that information out to readers and we don’t want to put out misinformation. There was a lot of speculation going on about what the booms could have been… We didn’t want to speculate either, so we just told people what we knew and what we didn’t know.

This act of being transparent about what is unknown can be somewhat controversial. Newly-appointed Executive Editor of The Washington Post Martin Baron recently said, “Readers think these days that all information is available instantaneously, and the truth is that not all information is available instantaneously.”6 He suggested that to preserve accuracy and maintain standards, journalists might need to slow down and possibly sacrifice readership.

However, in her 2012 interview, Peterson had a different perspective, “I think we’ve come to a place where our readers kind of expect to know as we know… So they were very tolerant. We didn’t get negative feedback on the fact that we had gone public with not knowing anything, frankly.”

In its determination to provide its readers the best coverage, The Tacoma News Tribune was willing to disclose what was unknown, which is a strong step in an era where the public response to media errors is strident. While the Obooma incident is certainly a smaller scale model of breaking news, and it has a different tone than some of the previous examples, it is one incident where up-to-the-minute reporting was balanced with prudence to ensure accurate news, and more serious news items might benefit the most from that kind of reporting. Moreover, as so much of our news about the news media today criticizes us because of our errors, it seems necessary that we also recognize the victories of properly handled live coverage.

1 Beaujon, Andrew. “Scott Pelley: ‘We’re Getting the Big Stories Wrong, over and over Again’.” MediaWire Latest, May 13, 2013. http://www.poynter.org/latest-news/mediawire/213172/scott-pelley-were-getting-the-big-stories-wrong-over-and-over-again/.

6 Frates, Chris. “Is Marty Baron the Man to Fix The Washington Post?” NationalJournal.com. Accessed May 28, 2013. http://www.nationaljournal.com/magazine/is-marty-baron-the-man-to-fix-the-washington-post-20130523.