Book on Ethics to Replace Spring '08 ME Issue 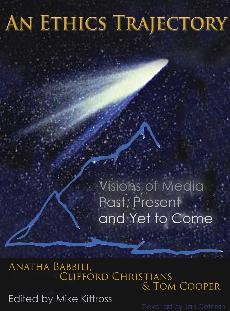 903rx7vfThe Spring 2008 issue of Media Ethics is replaced by the book An Ethics Trajectory: Visions of Media Past, Present and Yet to Come (Univ. Of Illinois, 2008). The book consists of the proceedings of the first and second U.S. media ethics summits in 1987 and 2007. The book also includes chapters by Al Gore, Adam Powell III, Clifford Christians on current and future media ethics issues.

Co-authored by Anantha Babbili, Clifford Christians and Tom Cooper and edited by Mike Kittross, the book reviews advances in ethics since the First Media Ethics Summit in 1987 and comments about future ethical issues in many media fields including photography, entertainment, journalism, public relations, diversity, design, new media, and advertising.

In February 2007, the "U.S. Media Ethics Summit II" was held at Middle Tennessee State University. It was organized by Cliff Christians and Tom Cooper, who are also two of the publishers of MEDIA ETHICS, hosted by MTSU - notably Dean Anantha Babbili - and sponsored by a number of contributors. There were nearly 40 participants - invited speakers such as John Seigenthaler, Al Gore, Robb Moss and Adam Clayton Powell III; representatives of various professional associations (such as AEJMC, SPJ, RTNDA, BEA, etc.) and publications; and some of the leaders in the field over the past several decades who served as "elders."

The intent of this forthcoming volume is to explore how the field has evolved since the first such "Summit" in 1987, taking advantage of the unparalleled amount of experience in the field of media ethics possessed by those who gathered in February 2007.

Subscribers to MEDIA ETHICS will receive the volume automatically, upon publication. Additional copies will be printed and distributed. We hope you will be pleased. We are already processing manuscripts for a regular issue of MEDIA ETHICS to be published next fall- and hope that you and your colleagues will provide us (before the end of August) with additional commentaries, research reports, and polemics that we will be able to publish then.