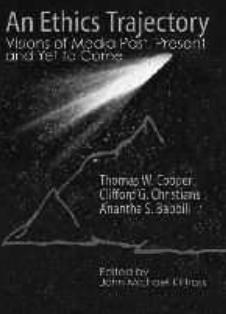 Ah, the anticipation. After 20-plus years of hoping to make a difference in media ethics practices in the United States, I held in my hands a book that would reassuringly sum it all up and lay anxieties to rest. A book that would assure me the pathway ahead for media ethics heaven is straight, with no speed limit.

More importantly, I would now find out what kind of impact my colleagues and I have had over those years as we have tried to prod media folk into thinking about their practices, rather than blindly perpetuating the tired dogma of long-time media practices. For, after all, the primary purpose of media ethics studies (immediately behind the providing of jobs for eccentric academics) is to nudge the media into morally productive behaviors.

The hedonist in me has constantly been gratified by what I was allowed to do in the field. The more practical side, driven by the hedonist who wants the satisfaction of being a change agent, seeks assurance that the final product justified my hopes and efforts.

I suppose the quote from Cliff Christians (in a summary of Media Ethics Summit I-1987-to which the 2007 Summit and current volume is a follow-up) summed my own career-end reflections about my media ethics efforts, and my view of the importance of the field: "Beyond our silly meanderings is the possible survival of the species," he said.

Alas, An Ethics Trajectory: Visions of Media Past, Present and Yet to Come, failed to do the impossible. A 294-page volume resulting from Ethics Summit II in Tennessee 20 years after the first Summit does indeed look at the past, dabbles in the present and necessarily speculates about the future of media ethics. It speaks of how many classes have been created to teach media ethics, public opinion about the media as it has waxed and waned (mostly waned) in recent years, and painted a reassuringly rosy picture of developmental progress in theoretical media ethics in two or more decades. All reassuring, but still no brass ring about whether media ethics in our beloved land is improving, still stuck in a rut or, indeed, regressing.

The book considers (in the micro ways of conferences such as this Summit) a wide array of contemporary problems (privacy, audio ethics, fairness, the Internet and other new technologies, photo ethics, entertainment, the black arts of persuasion, and on and on); with an even wider array of brief comments from participants. But still, one wonders about the effect of all this.

Cliff Christians points out that 20 years earlier the Summit had dealt primarily with normative and practical ethics. Perhaps that was a consequence of a field in its infancy. He added that the Summit I folk then suggested development of a theory base for ethics in the media, the development of which in the ensuing years is a source of satisfaction to him.

However, the question is still before the house: Has either normative or theoretical ethics yammering made a whit of difference in media practices?

Tom Cooper, an organizer of both Summits, talks at length about public perceptions of media in many critical areas-truth-telling, bias, objectivity, diversity, trivia, corporate control, etc., as though public opinion is an indicator of the ethics status of media. The silent assumption is that ethical media would attract larger audiences and have greater influence as they inject their critical ingredients into what makes a democracy work. Yet, it should not go unnoticed that ranting radio and cable talk show hosts, with content bearing only a faint resemblance to the information believed necessary for a democratic society, do attract slavering swarms of listeners and viewers who are incited by the very same talk show hosts to be corrosively critical of the media. Meanwhile, newspapers, over-the-air broadcasting and others of the more respectable media are stumbling and gasping for life as lifeblood audiences and advertising drain away.

Certainly, there are speculations in the book, based on a hundred segmented descriptions of the ethics elephant, but nothing definitive to assure us the American people are better informed across the depth of earthly-and celestial- happenings to enable them to make wiser decisions. At the time of the Summit (in February and March, 2007 at Middle Tennessee State University) it would certainly appear the media (at least in some eyes) had failed to keep the wool above the collective national eyebrows and we had sunk into a pit of Imperial Government (anathema even in a democracy in peril). However, the election of 2008 gives some hope that the collective media (old and new, and despite the talk show buzz), were doing their share to pump the bilge water from the Ship of State-perhaps a reasonably reliable indicator of moral virtues.

Perhaps still feeling the wake of the Bush-Cheney waves, Christians suggests some withdrawal from concentration on specific problems of media and folding concentrated doses of such basic moral principles as justice, truth-telling and human dignity into the narrower problem of communications ethics. Certainly, the direction of all media (from traditional newspaper through established electronic media and fetching up against the puzzling universality of new electronic services and devices) over the 20 years between these Summit meetings suggests the need for a huge dose of socially principled instruction as established media wade more deeply, and measurably, into the marshes of questionable ethics in their struggles to survive against the upstart certainly-they-are-not-journalists of the pervasive new electronics. Above all, virtually all media act as self-centered adolescents, rather than the rare altruistic adult one would hope them to be. But what else can we expect? Those newborn electronic media are pilfering the cash cows of traditional media (such as advertising, particularly classified ads) and distributing much more daring and socially stimulating information than their grey-beard cohorts.

All that being said, and some frustrations aired, this is a magnificent book coming from what must have been an energizing and dynamic conference. The marvelously broad base of participants was obviously thoughtful and most appeared to be at the top of their professional game as they flogged their favorite topics. Tom Cooper, Cliff Christians and Peggy Bowers introduced the meat of the book with essays on media ethics past, each titling their papers "Between the Summits" before launching into excellent essays on public opinions of the media (Cooper), the growth of media ethics courses and teaching (Bowers) and emergence of media ethics theory (Christians). Mike Kittross, editor of this magazine, edited the volume and also recapped the proceedings of Summit I outside Boston in March, 1987, thoughtfully including photos of all the participants (all smart-looking in their youth), recalling the content of that gathering.

The discussions were lively but necessarily, and disturbingly, brief. As it is in all such gatherings, more questions were raised, and very few were answered in sufficient detail. Nevertheless, a careful reading provides a catalog (limited only by the interests of the participants) of contemporary ethics concerns. There appears to have been a congeniality from which few sparks emerged, unless Kittross judiciously smoothed over disagreements. The number of participants more than doubled, from 20 in 1987 to more than 40 in 2007), probably suggesting an expanded interest in the field along with a need to be included in the important discussions on the topic. The inclusive list assured the list of topics would be long and the subsequent discussions would consist of cryptic contributions, both from individuals and from working groups formed to deal with specific topics. Jay Black, at closing, identified 13 general issues that "rose to the top"; most of which are questions we deal with every day in teaching or deliberating on the effectiveness, or lack thereof, of ethical sensitivities in the media: new technology, challenges to truth-telling and objectivity, accountability and transparency, media literacy, economic realities, vaporous mass audiences, diversity, vulnerable stakeholders, loyalties, blurred functions, and ethics research and teaching.

Also on the list, but perhaps not on the radar of many ethics specialists, were access to government information and visual and design literacy. All the topics received some attention during the discussions, but they more whetted the appetite than satisfied the cravings for the meat of the topics.

And excellent foundational papers are included near the end of the volume, looking at what their authors consider future necessary considerations for journalism, photography, the persuasive arts, media diversity, ethics and the law, entertainment, and new media.

In the conclusion, Cooper seems most profound in suggesting the need for a great deal more DOING, perhaps not comfortable thought for academics whose staff of life is TALKING. But "doing" is what is needed to penetrate the protective bulwarks raised around virtually all areas of communications heeding the warning that ethicists are abroad. After all, communications professionals, looking at virtually all other fields, can be forgiven for believing that if anyone wants to talk ethics to them, it probably means restrictions. Few are persuaded that media ethics can be a freeing influence in their professional lives, helping them shed the restrictive orthodoxies and dogmas of years past. However, they should be on notice that they need to be thoughtful. The work is there to be done, the delegates of Summit II identified the slope of the playing field and now it is time for them to stop talking and get to work.